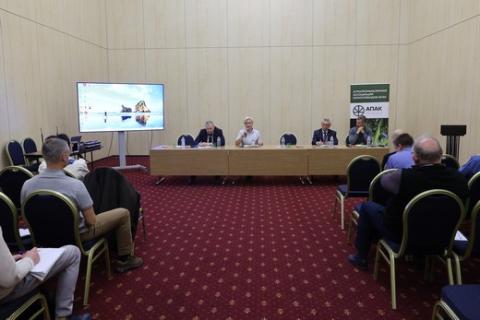 The meeting was held at the site of the Crocus Expo exhibition center as part of the business program of the exhibition of specialized equipment AGROSALON.

On the agenda, the participants of the meeting discussed the necessary internal issues, as well as key issues of regulatory legal regulation of the hemp industry, in particular, touched upon the important issue of amending the technical regulations of the Customs Union regarding the use of parts of technical hemp in the production of special food products.

“Today, of course, the complexity of the current situation is noted, and in relation to the development of bast crops, it is worth talking about the importance and tasks of industrial safety, including the tasks of providing clothing for the population. Industrial safety, provision of raw materials is the No. 1 topic for hemp growers,” said Petr Chekmarev.

He noted that due to the fact that hemp was a forgotten culture for our country for some time, there are problems both in terms of regulatory regulation, and related to technological issues, and with the provision of equipment. In this regard, there is a need to form a certain structure that will coordinate the development of bast crops and in terms of activities on the material and technical base, and on mechanical engineering, and on processing and bringing raw materials to a finished consumer product.

Petr Chekmarev also emphasized that strategically, in order to have independence and be a leader in the world markets, it is necessary that the sown areas for flax and hemp reach 2 million hectares and 1 million hectares, respectively. For these purposes, the country has the necessary conditions - natural and climatic conditions which allows the production of crops of high yield and good quality, a land resource, since it is realistic to allocate 3 million hectares for bast crops. These volumes, of course, will entail the systematic development of our own mechanical engineering, specialized for bast crops.

Petr Chekmarev also noted the complexity of the situation in the light industry due to the lack of cotton supplies and emphasized the need to create economic and organizational conditions for the development of bast crops and related industries. He also singled out the creation of a specialized program as proposals, noting that the work should be carried out together with the scientific community: “Today, business must decide and set a task for science - what is needed, what developments and in what directions the industry needs, what specialists are needed in order to the industry developed effectively and we were independent in this direction.” The Director of the Institute of Agrobiotechnologies of the RGAU Moscow Agricultural Academy named after V.I. K.A. Timiryazev.

In addition, Sergey Belopukhov noted that equipment for the analytical service laboratory for the complex analysis of chemical compounds was purchased and, for its part, the academy is ready to help industry representatives in solving the problems that hemp growers will set for science in terms of agricultural technologies and product positioning.

The speaker noted the carbon footprint as an important direction: “From 1 ha of hemp, he has a delta of 2.5 tons, that is, as a result of photosynthesis, the culture reduces the emission of CO2 into the atmosphere.” Sergey Belopukhov also emphasized the need for the development of light industry and as a direction for the production of technical textiles: “It is in demand by our industry, in this area we can offer you flax and hemp fiber. Now artificial and synthetic fabrics are being developed, there are very few natural fabrics, mostly mixed fabrics. Therefore, in the current situation, this is the direction that will be promising in the near future.”

The speaker touched upon the topic of the correct promotion of culture in terms of the use of technical hemp and medical hemp. This topic was continued by the head of APAK Milena Aleksandrova. She explained that it would be correct to start with a correct understanding of Federal Law No. 3 of January 8, 1998 “On Narcotic Drugs and Psychotropic Substances”, which regulates the circulation of narcotic drugs. “According to Article 2.1 of this legislative document, there are exceptions to which this law does not apply. Hemp as a plant is not covered by this law because it is allowed to be cultivated for industrial purposes. The Decree of the Government of the Russian Federation No. 101 tells us that it is possible to cultivate hemp - this plant - hemp, included in the State Register of Breeding Achievements approved for use, and containing THC not more than 0.1%, is allowed for industrial cultivation. That is, the legislator allowed the plant and those varieties containing no more than 0.1% THC for industrial cultivation,” Milena Aleksandrova explained.

She also explained that with regard to the narcotic field of the hemp industry, it can be a legal raw material and used for medical purposes and illegal. “As for legal use, only state institutions and licensed state institutions, here including scientific institutions, have the right to work with this culture. The work and data sphere are regulated by Decree of the Government of the Russian Federation No. 1007, it does not concern us as manufacturers,” commented the head of APAK.

Milena Alexandrova invited industry participants to discuss an open question: is it necessary to separately distinguish technical and non-technical hemp in terms of terminology, given that such changes will entail a number of other changes in the legislative framework, and in technical documentation, and in the nomenclature.

It is important to correctly assess the feasibility of this work. In this regard, APAK members and industry participants were asked to define non-technical hemp, that is, medical hemp, here it is possible to introduce additional regulatory legal acts, but this should be in the field of industrial production, it is also necessary for industry participants to understand the further development of the medical field.

Particular attention was paid to changes in the technical regulations of the Customs Union regarding the use of hemp in the production of special food products. Currently, only hemp oil is allowed for use. APAK members are invited to consider the possibility of discussing, together with the Federal Service for Supervision of Consumer Rights Protection and Human Welfare, a change in terms of including hemp seeds in the list of acceptable for use.

Special attention at the meeting was paid to the development of the sale and promotion of hemp products. This was told by the chairman of "Hempiko" Sergei Savenkov. Currently, the industry is facing significant problems in terms of selling hemp products, sales on marketplaces are limited. As one of the proposals aimed, among other things, at the effective promotion of the industry, more frequent online meetings of industry participants were announced, as this is a kind of exchange of experience, opinions, positions, which in turn will positively affect the work as a whole.

Based on the results of the meeting of the profile association, a number of proposals for further discussion will be formed.