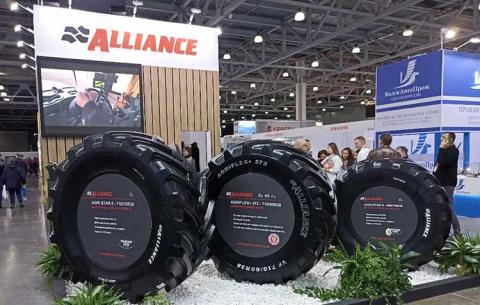 The departure of a number of manufacturers from the Russian market opens up new opportunities for Alliance brand dealers Yokohama Off-Highway Tires (YOHT) took part in the annual International specialized exhibition of agricultural machinery AGROSALON held in Moscow.

According to Dmitry Sysoletin, director of the agrarian direction of AgroPromShina LLC, the official dealer of YOHT, due to the current situation in the industry, a redistribution of forces is now taking place. “In the last six months, many major players have left the Russian market. But there are no interruptions in the supply of tires in this regard, he said. - The remaining manufacturers, both Russian and foreign, on the contrary, increased the volume of deliveries. There is no need to expect a shortage of tires for agricultural purposes and other industrial segments.”

Representatives of YOHT introduced the visitors to the exhibition with the key products of the Alliance brand portfolio. Among them are tires created using VF (Very High Flexion) technology: Alliance Agriflex + 372VF for tractors and combines; Agriflex+ 354 - for sprayers and tractors; and Agriflex+ 389, which combines flotation performance and VF.

According to Sergey Andreev, YOHT regional engineer, “VF technology has been appreciated by farmers all over the world, including in Russia”: “The use of VF tires on agricultural machinery makes it possible to save agricultural land by reducing soil compaction. Thus, the farms reduce the cost of land reclamation, he stressed. “In addition, reduced pressure technology contributes to significant fuel savings. This property has been documented in many field tests of Alliance tires.”

AGROSALON's guests also got acquainted with the company's universal solutions, including the Alliance 585 agricultural tire for telehandlers, which can be used on both soft and hard surfaces.

The exposition also featured the brand's bestseller, the Alliance Agri Star II tire, created using a multi-layer technology of stratified tread blocks, which "helps to compensate for the loss of traction due to wear, to achieve excellent driving properties and longer traction."

At the exhibition, the results of the field work of equipment equipped with YOHT tires were summed up. During the season, the specialists of the Steppe agricultural holding worked on agricultural machinery equipped with Alliance tires. The term and operating time amounted to about 1.5 thousand engine hours on the rear axle and about 3 thousand engine hours on the front axle.

“Operation in real field conditions confirmed significant fuel consumption, fuel and lubricants by an average of 10%, tire resistance to damage,” the company noted. “These and many other results were documented: the progress of work was recorded by on-board computers installed in the cabs of tractors and sprayers, and were presented in videos at Agrosalon.”

Dmitry Sysoletin, whose words are quoted by Glavpakhar, also emphasized that since “many brands of tires in the premium and middle segment have left the market, it has freed up by 60%, and the company’s task is to fill the resulting niche at the expense of its partners. The emphasis is planned to be on Alliance products, which they are distributors for.

” According to him, the new YOHT plant, recently opened in India, will significantly increase the volume of purchases: “Today, the company is 70% ready for the sales season, plans to reach 100% readiness in a couple of months. We manage to win most of the tenders without any problems due to the reasonable price and the products in stock.”

He also noted that since August the market has revived, supply volumes are growing, as agricultural producers can take loans to replenish working capital and buy tires. The expert is also confident that purchases deferred in the spring due to the uncertainty of the situation will be made in the autumn.

Answering questions about the supply of tires for Russian production, he stressed that this is a separate type of business - OEM supply. The issue of installing Alliance tires is also a matter of price.Many manufacturers do not want the cost of their final product to rise. At the same time, the main manufacturers from Russia either already work with the company or have an open contract. Sysoletin is sure that tires of the appropriate quality should be installed on a quality tractor.

“Figuratively speaking, we should not think that we will look good and logical in galoshes. In the car, everything must match in quality: battery, engine and tires as well. We are suppliers, for example, for the flagships of the domestic agricultural machinery industry - the St. Petersburg Tractor Plant and Rostselmash. For Yokohama Off-Highway Tires, the supply of tires to Russian manufacturers is a certain status that we would like to maintain,” he said.